Not fully finished. You can contribute if not lazy :-P

What a WCF is?

WCF is a framework for building service-oriented applications.

In order to access some WCF service you have to define endpoint which contains such key parameters as: Address, Binding and Contract

Address can be defined as IP or host name with port and special path. Different kinds of protocols can be used: HTTP, TCP, NamedPipe, Peer2Peer, MSMQ.
http://host:8080
net.tcp://host:987/service
net.pipe//pipe/service

Supported bindings and its characteristics are shown here

Contract is a way to describe what service does.

Standart bindings support transport protocols: HTTP, TCP, P2P, Named Pipes, MSMQ.
Purpose of using of named pipes is when communication is required between different WCF applications on a single computer, and you want to prevent any communication from another machine.

Encoding could be binary, text or MTOM.

Security could be on transport or message level or without any.

Some binding support sessions and some of them are not.

Some binding support transactions and some of them are not. 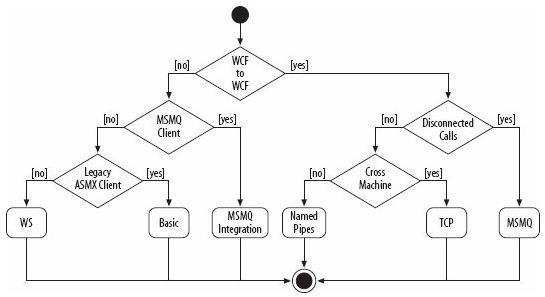 And the fault can be handled on the client side using:
catch (FaultException<SomeFault> e).

Request-Reply Pattern is a syncronous way of comunication. The client thread sends a request to the service and thread hangs while waiting the serice responce.

One-Way Message Exchange Pattern is the of comunication "shoot and forget". Client sends a request without waiting response and doesn't have the result of operation or even the information concerning the exceptions that may occur.

Duplex or Callback Message Exchange Pattern is an asyncronous way of comunication. Client sends a request without waiting response but having the result of operation as callback from the server side. IOW it is a Request-Reply Pattern without hanging the client thread.

One-Way pattern can be easily implemented by setting IsOneWay property in your operation contract.

Duplex pattern is a bit harder. You have to have two interfaces, the service interface and the callback interface. Both operations have to marked as OneWay and a service must know the callback contract interface.

Looks fine, but who will call LoggingSuccessful? From the service operation body (implementation of LogAction method) will be called the LoggingSuccessfull method manually (OperationContext.Current.GetCallbackChannel

On the client side you have to implement ILoggingServiceCallback in order to have an ability to execute some logic when service calls back.

WCF service session used only to identify the client, an can't store some additional data because service must be stateless by definition.

- Not all the bindings support sessions, so the one that supports has to chosen.

In the case of NetTCPBinding and NetNamedPipeBinding, WCF identifies the client by the underlying transport channel. However, the WSHttp uses connection-less http protocol, so in order to identify the client session it adds session id into header.

Operation can be marked as an operation that breaks session. For this purpose OperationContract has the "IsTerminating" property. If it set as True it breaks the session.

Not all the standart binding support transactions.

The transaction necesity can be configured by OperationContract.TransactionFlow property, it could be Allowed, NotAllowed, Mandatory.

Transaction can be also controlled from the client side, using transaction scope (using(TransactionScope scope = new TransactionScope())). The "scope" variable in that case musn't be sent as operation parameter, it will be picked up automatically.

REST service is a service that uses URI and operation name (POST, GET, PUT, DELETE) for getting operation result. It can use any transport protocol, but preferable for this purposes using HTTP becauses it realises CRUD operation on the protocol level and can be acces from any browser.

To make it work, add additional attribute (WebInvoke) to your operation.
WebInvoke can be configured using various properties, the more interesting ones:
- UriTemplate - that defines URI wich be used to acces operation and parameters, like: "Customer/{id}";
- Method - defines CRUD operation, like "POST";
- ResponseFormat - can be defined output format as an XML or JSON. Response format can be chosen automaticly using WebHttpBehavior.AutomaticFormatSelectionEnabled.

REST operations will not appear in WSDL specification.